I am not your erotica/ Zane type of writer, my story is not that juicy of a story. I am also too shy to get into details but I will let you know what happened after we left the club because someone is nosey (Just kidding. I was going to write about it regardless).

After about a 10 minute cab ride, we arrive to this quiet neighborhood.  At first glance you would think no one lived there, like some horror movie. Yet, I was not afraid to be there.  We walked down a long block and sat outside on a bench.  I wanted to question his motives but he was talking so maybe he was trying to see if I was up to “hang out.”

We arrive at his friend’s apartment. It was a small studio-like row house (for my Philly peeps, you know what this looks like). As you waked in, there was a small wooden table with two chairs to the left and a dark red futon to the right. There was a tiny staircase in the middle and the kitchen and bathroom were in the back. (Felt like some hood shit but then I remembered where I was).

We sat on the couch and talked for a while. He is such a beautiful man. The way his eye spoke to me, the chemistry was real. I knew I had to have him. And he kept licking his lips. Was he nervous or just finding his way to turn me on?  It was not long until we were making out. I climbed on his lap and well I won’t get into details. Just understand my shirt flew, earrings flew off, and next thing I remember is him pulling me closer as he gave me a deep kiss. And than…. let’s just say at one point he had me climbing up the couch (Yasssss Hunty, that good).

I remember kissing his neck. I love his neck, Sounds weird but there is just something sexy about his neck. Oh and his necklace; a black rosary that I pulled back. Last thing I needed was the cross hitting me in the face reminding me that this was un-lady like. But shit, everything felt right and I didn’t care!!! He was what I wanted, what I have been dreaming about.

We cuddled and fell asleep for about an hour and woke up to a noisy neighborhood. Crazy how just about an hour before it was dead as a haunted movie and now full of life. He wakes up and says, come on I got to get you home. So, I change (yes I packed a change of clothes in my purse) and he walks me all the way to my door. BTW- He was beautiful to look at, at 8am. 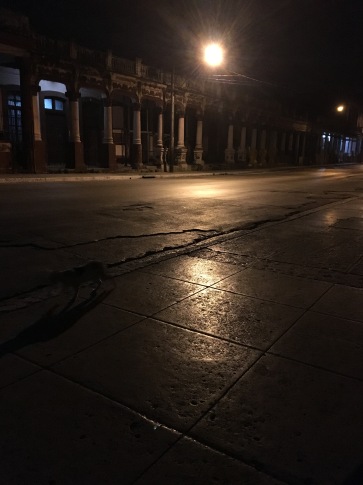 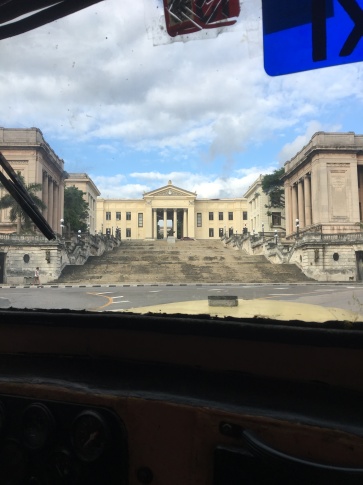 My only pictures of that night/day.

That morning, Luis showed me around his neighborhood as we walk to grab the community cabs. These cabs are cars that go straight and pick up passengers and drop them off alone that route- Kind of like the City buses without any turns. Anyways, he tell me not to take out my CUCs as they pay in Cuban pesos. I get it, don’t let them know I’m a tourist. Another reason why I have no pictures of the walk.  Can’t let them know I’m not from around these parts.  He also tells me not to speak because they will know I am not Cuban… Challenge accepted!

Hand in hand, we hopped out the first cab and then we grab yet another cab going a different route. (Grabbing a cab here is so much easier that NYC). Anyways, I would have ditched the cabs and walked all day if I knew I got to spend more time with him. I didn’t want it to end but I knew this was our good-bye as he had another concert a few hours from Havana that night thus, I wasn’t going to see him. Every minute that passed was a breath I tried to hold. After about 5 minutes in, we eventually gave in and talked as we were riding the cab. Eff the not talking shit.

I want to say about 20 minutes later we arrive tat the casa particular. He tells me he had a great time and wants me to call him later. We hugged and kissed good-bye several times.  Each time we found an excuse to talk some more. I know we must say goodbye and so our last hug was a lot tighter. I kiss his lips and it felt like the sunrise all over again. I look him in his eyes and we said good-bye. I walk to my door and turn around to find him gone. I sank a bit and thought to myself Will I ever see him again?